Advanced Cosmetic Procedures (ACP) uses electrolysis techniques and covers  a diversity of skin blemishes that can be quickly and easily treated with often immediate and effective results, offering an eventual blemish free and smooth skin.  Allowing your electrolysis specialist to remove unsightly skin blemishes that have affects on confidence and wellbeing.

Electrolysis techniques were first used in very early 1900’s for the treatment of port-wine marks, broken capillaries, spider naevi, warts and even xanthoma (yellow pigmented spots or plates found on the eyelids).

Today’s modern treatment technology is safe, comfortable and effective and very much in demand.  Probably the least invasive, minimal and effective method of treatment for such a wide variety of  blemishes.  Electrolysis has got to be the most sensible and safe choice, results are often instantaneous, pleasing and life enhancing.

WHAT IS COSMETIC BLEMISH REMOVAL?

It is a medical aesthetic technique, using the very latest techniques many different types of superficial skin lesions can be reduced and accurately removed safely and effectively.  The method of electrocoagulation had been in use since the early 1900’s and is all documented in medical records and journals.

TYPES OF BLEMISH THAT CAN BE TREATED

THESE FALL INTO THREE CATEGORIES.  FIBROUS, VASCULAR AND MOLE REDUCTION

These are common but harmless benign blemishes generally found on the face, neck and torso, falling into sub categories of warts, skin-tags and benign lesions.

Vascular meaning blood, so that the treatment of red blood spots on the face and upper body.  Thread veins (Telangiectasia), blood spots (Campbell de Morgan and Cherry Angiomas) and Spider Naevus (Telangiectasia angioma) are all treatable improving the appearance of the area.

We all have the odd mole or two, some of us seem to have more and some dozens.  Many of them appear through our teen’s too thirty’s.  They can be raised, flat and any colour from skin coloured through to very dark.

Common methods of removal are excision, cryotherapy and laser, all of which can leave behind scars of varying sizes and excision leaving by far the worst!

Advanced Aesthetic practitioners don’t remove in this clinic via these methods.  We do not remove the entire structure but flatten it to leave the least trace possible of treatment.  Once healed there is little evidence it was ever there.

If hairs from out of the mole we do recommend and advise for this to be treated first with electrolysis.  It is very common for a mole with hair follicle bulk to be more obvious and once these hairs have been treated via the hairs being removed sometimes they can become inevident or disappear from sight.

This is not a removal treatment it must be stressed upon.

The mole is still present within the skin.

reduced.  Please also note that only ONE mole will be treated at any one time.

Hairs from moles can be treated, once the treatment has started the mole may reduce in size and colour.  Hairs in moles are generally deep terminal hairs with a very good blood supply.  Repeated treatments are required.  Moles respond extremely well to electrolysis treatment, the effects can be visibly reducing the size and often lightening the colour of the mole.

An accumulation of pigments (hyper-pigmentation) generally yellow pgment called lipofuscin due to overexposure of UV and the natural ageing of the skin.  Can be seen anywhere on the body and are very common on the hands.  Healing on the hands does take longer than on the body and you have to be viglant with the aftercare and keep the hands clean and as dry as possible.  Treament of these blemishes is a very superficial process, successful treatment is often attainable but cannot be guaranteed since the discolouration may be located in the deeper dermis.  Advice will be given upon consultation whether any pigmentation treatment you undergo will be expected to have a successful outcome.

These are tiny, white, hard round spots containing keratin which lie superficially under the surface of the skin. It can look like a small pimple trapped underneath the skins surface.  They can vary in size from very tiny nearly inevident but you can feel them to a grain of sand and larger.  They are ‘Keratinised’ skin cells that build up and become trapped beneath the skins surface.  They can also be referred to (nicknamed) ‘milk spots’.  They can look white or yellowish bumps, most often appear on the face commonly around the eyes and cheeks, though can occur anywhere.  There is no exact cause as babies can have these at birth,

although they are often associated with dry, dehydrated skins. it suggests that too much Vit C or over rich creams or cheaper creams with too much mineral oil content and too high cholesterol have been apportioned for blame.  Some people are quite prone to them and may keep producing them and so to keep the condition under control may need visits for removal every few months.

There are various types of warts including plane, common, filiform and verrucas and all can be easily and successfully treated with electrolysis.  These types of warts can develop on their own or in clusters and are HIGHLY CONTAGIOUS.

This is a wart on the sole of the foot.  They can start off just as a speckled pink area with black dots, Look like a petter pot, have a rought crumbly layer of skin (crust like).  They can vary in size from a pin head to a large mosaic verruca covering a vast section of the sole of the foot.  They are caused by the HPV Virus.  As with most viral infections they respond when appropriate destruction of the resident virus.  This treatment using ACP is highly responsive and effective and leaves little trace behind.  Dependant on the age/type of  a verruca and treatment technique they can require more than one treatment.  Treatments are carried out as necessary and after treatment assessments.

These have a rough scaly texture and feel hard to the touch, varying in colour and can be white, tan, pink or a greyish hue to them and some are even flesh coloured.  They are contagious!  They are caused by a strain of the Human Papilloma Virus (HPV) and are commonly found on the hands and fingers in both children and adults and can often require 2-3 treatments to eradicate entirely.

Also a strain of the HPV Virus, they are smooth and flat to the skins surface and can be round, skin coloured, brownish and yellowish.  They tend to grow in sun-exposed areas.

What Is A Seborrheic Keratosis? ( seborrheic wart)

This is very common on the face mainly the hairline and torso.  Although these are classed as part of the wart family they are not-contagious  form of wart.  They are a symptom of skin ageing and over or long term sun exposure and can also be hereditary with a gernetic link.  Colour of them varies from skin tone to very dark brown.  They resemble a ‘crispy’ layer on the skin to a ‘bran-flake’ stuck on the skin.  If very old it can feel hard and fibrous.   These dry and crusty Keratosis often growing upto 2 inches across and are considered cosmetically unattractive.

This blemish is where the skins pore become blocked by an overgrowth of the surface epidermis. Acting as a plug.  The sebum contained in a sebaceous sac underneath the skins surface builds as it cannnot escape.  They vary in size dramatically and areas they appear most commonly are the face, chest, scalp and back. They frequently need a few treatments to empty them completely.

This is an infection of the sebaceous gland in adults.  The blemishes are yellowish, relatively small, soft papules on the face particularly on the area of the forehead, nose and cheeks.  They can br randomly placed or it is possible to have dozens.

What Is A Skin Tag?

Skin Tags (fibro-epithelial Polyps) are an extension of skin cells that are overgrowing from the main body of skin.  They are formed in areas of friction (rubbing).  Areas of the neckline, underarm, under breast, waist, collar line are the most common, they can also appear on the eye area.  Skin tags are loose movable pieces of excess skin attached by a stalk to the main body and come in all shapes and sized as small as a pin dot upwards.  The longer they are left the larger they potentially can get, however not always.  They can commonly look like a mushroom growing out of the main skin area

These are usually found around the lower eyelid and cheek area and are a flesh coloured  or have a yellowing look to the ‘bump’ usually occuring in clusters and in a symmetrical  pattern.  After treatment and as the blemish heals it will flatten and visibly reduce in its size.

Called a Spider Nevi as it looks just like that.  They have a largely dilated blood vessel in the centre and smaller capillaries that radiate from this (like spiders legs).  They can be singular or can merge and develop together if untreated.  Often found on the cheeks, chest (décolletage) and can be found on children as well as adults.  Knocks and bangs can cause these and other causes such as playing sports and injures.

These are often treated.  The most common areas for these are the face and décolletage (chest) area.  They can be referred to as broken capillaries; however they are not broken just permanently dilated, meaning that they are worn out and the walls of the capillary have become thin from the constant constriction and dilation.  This happens as we age  these vessels loose their elasticity and can become permanently dilatedand they become visible through the skin with the naked eye, hence being able to see the redness.  There are numerous causes some are ageing, sun-damage, hereditary, pregnancy, trauma e.g. the rubbing of spectacles, bumping into something, energetic sports, smoking, temperature extremes, hormones and fragile skin are also common causes.  They are commonly seen in maturing skins.

Bright Ruby red, superficial vascular blemishes.  The blemishes are red because they are vascular meaning blood.  They can be small and slightly domed shaped, smaller ones appear to look flat usually 2mm or less.  Larger blemishes can be as large as a pea with a visible raised domed shape to it.  They are mainly on the trunk of the body, back and front and are very common in mid ages of adulthood.   Most people from the age of 30 and over have at least one and are often more common in males.

This is a very common condition. Xanthomas are deposits of fatty materials under the surface of the skin and can appear anywhere on the body.  Usually the deposits are yellowish in colour but can also bee skin tone and lighter. Xanthelasma Palpebra is a common type that appears on the eyelids and is very successfully treated using Advanced Electrolysis techniques.

The causes are unknown but Xanthomas are commonly associated with an elevated cholesterol levels.

The creamy yellow colour does not respond to treatment but the blemish size is considerably reduced and therefore easily camouflaged proving much more cosmetically pleasing.

This is a infectious and highly contagious benign cutaneous condition.  It results in 'troublesome spots' that mainly occurs in young children less commonly in adults.  These MC blemishes present on the face, neck and trunk, the lesions are elevated, smooth and reddish papules.   Individuals with a healthy immune system Molluscum Contagiosum usually spontaneously resolves itself within 1-2 years.  If  immune-compromised then the symptoms can be sever.  Treatment is usually only reccomended for older children and adults.  If the spots are scratched or irritated they can scar and the virus will spread, secondary infection may also be caused.  Due to this and if the condition risks this it is a very effective method of treating this condition

A common disorder that develops in adolescence on black and Afro-Caribbean skins.  Dome shaped, smooth, brown to black papule seen mainly on the cheeks, neck and upper chest.  Easily and successfully treated. 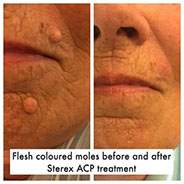 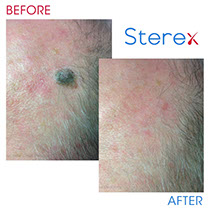 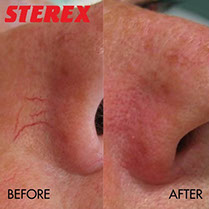 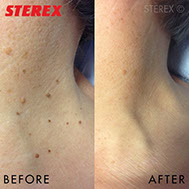